Update: Alright folks, I know we’re incredibly behind now. As most of you know, we’ve already been home for 2 months now and still haven’t posted about the second half of our trip! Getting back into real life has been no fun, and finding the time to finish these posts has been much harder than anticipated. But I’m determined to try. Finally here is the first one. Here’s hoping it won’t take me another 2 months to post the next one!

Unlike most of our trip, when we arrived in Kathmandu, Nepal we actually had a very clear plan of what we intended to do in our time there. Our main purpose for visiting was to complete the Annapurna Circuit, which is a multi-day trek around and across the Annapurna mountain range in the Himalayas. While the most ideal time to do this trek is September/October, we’d read that April is the next best option so we’d booked flights to Nepal relatively early on in our travels to ensure we would be able anchor our other travel plans around these dates.

Jesse had first mentioned his desire to go to Nepal very early on in our trip planning / day-dreaming days (well over 2 years ago), but truthfully I knew nothing almost about Nepal at the time. He told me that there were these beautiful multi-day treks where you hiked through all sorts of different landscapes and saw tons of stunning scenery, all while surrounded by some of the tallest and most picturesque mountains in the world. You hiked from village to village, and stayed in “tea houses” each night where you could get meals and beds to sleep in. Though it all sounded amazing, I was worried about whether we were in adequate physical condition to take on this challenge. But Jesse assured me that it was “just like going on long walks” each day. OK, I thought…sounds reasonable enough. But we’d also been toying with the idea of visiting Burma, which we knew was pushing the limits of how long we would have for each of the countries we wanted to visit. It seemed like we might have to choose between the two countries. Then just a short time before we left on our trip we were having dinner with our good friends Stephanie and Andrew who also did a similar long-term trip a few years ago and they basically sealed the deal for us. They told us that the Annapurna Circuit was the absolute highlight of their trip, and strongly recommended that we go. Everything they told us sounded amazing, so we made up our minds that day.

Though we’d heard from many sources that having a local guide for these treks isn’t necessary, I felt pretty firmly still that I wanted to hire one when we went. Along with the comfort of knowing someone would be there to ensure we are on the right path, I also knew that I would want to be able to talk with and ask someone questions about local life, food, and customs…because realistically, the likelihood of my reading up about them in advance was pretty low (I always fall asleep when I start reading guide books), and I didn’t want to spend so long in a country without learning about its people. So even though it dramatically increased the cost of our trek, I convinced Jesse to let us hire a guide. In addition to that, as I started to read more about the packing lists that people typically bring on these treks, I also insisted that we get a porter to carry our stuff. I think Jesse probably didn’t think this was really necessary, but I had a “princess” moment and said that there was no way I was going to carry my pack for 20 days up and down mountains by myself. Without needing to directly threaten him, he could sense the amount of whining and hissy fits coming his way should he disagree with me.

So once we’d settled that we’d be getting both a guide and porter, next we needed to decide how to find the right ones. For good reason, Jesse voiced some initial concerns over how it might impact our time there if we didn’t find a guide that we actually got along with, as we’d be spending pretty much 20 days straight with this person. Obviously that could be a real bummer. So I started to do some searching. That’s when I found out that there are over a thousand trekking companies based in Kathmandu alone and so sorting through all the options became pretty daunting. Thankfully I remembered that I’d been following another couple’s travel blog before we left on our trip and they also completed the same trek. They’d written about an incredible guide that they had who was fun and super knowledgeable so after sifting through their old blog entries again I decided to contact the company that this guide worked for called Funny Nepal Treks & Expedition. And so began a series of 20+ emails between myself and Fanindra, the company’s owner, where we discussed all the options and considerations about the trek. Fanindra was great at answering all my questions, from how flexible the days would be for us, to which guide we’d get, to what the cost breakdown was, to what kind of food we’d be able to eat, to what the weather would be like. And after lots of number crunching and back & forth discussion we settled on all the details for the trek. In addition, Fanindra arranged of all our transportation and accommodation for our time in Kathmandu and Pokkhara before and after the trek, which meant that we literally just got off the plane and had everything completely taken care of. It was a welcome change from all the day-to-day planning we’d been accustomed to for the past 3 months.

Meeting Fanindra in person shortly after we arrived in Kathmandu was a real pleasure, and his professionalism and hospitality really made us feel happy with our decision to work with his company. Though we’d originally planned to stay 3 nights in Kathmandu before the trek, he suggested that we could leave one day earlier if we wanted to and spend more time on the trek itself or in Pokhara at the end. We had only been in Kathmandu for a few hours by that point, but our first impressions were that it was a pretty massive, busy, hot and dusty city. We’d come to Nepal in order to experience a bit more untouched nature, so it seemed like a good idea to get out of the city sooner rather than later. Our only constraint was that we needed to do some shopping first because we didn’t have all the trekking gear we’d need yet, so Fanindra gave our guide Hari a call to see if he could meet us the next day to help us choose out good gear and get us some better prices. We planned to meet the next afternoon.

The next morning we explored the Thamel area, which is where most tourists about to embark or returning from a trek can be found. Though completely brimming with tourist agencies, trekking gear stores and souvenir shops, the area still has a lot of character and sites within walking distance so we decided to check some out. We pretty much just made a slow and winding route towards Kathmandu Durbar Square, and ancient square built in front of the royal palace of the old Kathmandu Kingdom. On our walk, we passed by many Hindu and Buddhist religious monuments, including small temples and stupas which we took some time to explore. Jesse reminded to me that we should always walk on the left or clockwise around sacred Buddhist monuments, which is something we’d do countless times in the following weeks. The streets that led us on our path were narrow and filled with traffic of all types, from cars to motorbikes to bicycles to pedestrians. It was loud and crowded and colourful pretty much everywhere we looked. People would line the streets or watch out their windows to catch a glimpse or a nearby wedding ceremony or a passing procession. There was never a dull moment. Truthfully, it was more fun for us to just walk around and observe all the hustle and bustle happening everywhere rather than worrying about seeing any specific sites. By the time we made it to the square, we’d already run out of time to explore it because we had to head back to meet our guide Hari! So we didn’t really get to spend a lot of time exploring Kathmandu, but did have a memorable morning in Thamel nonetheless. 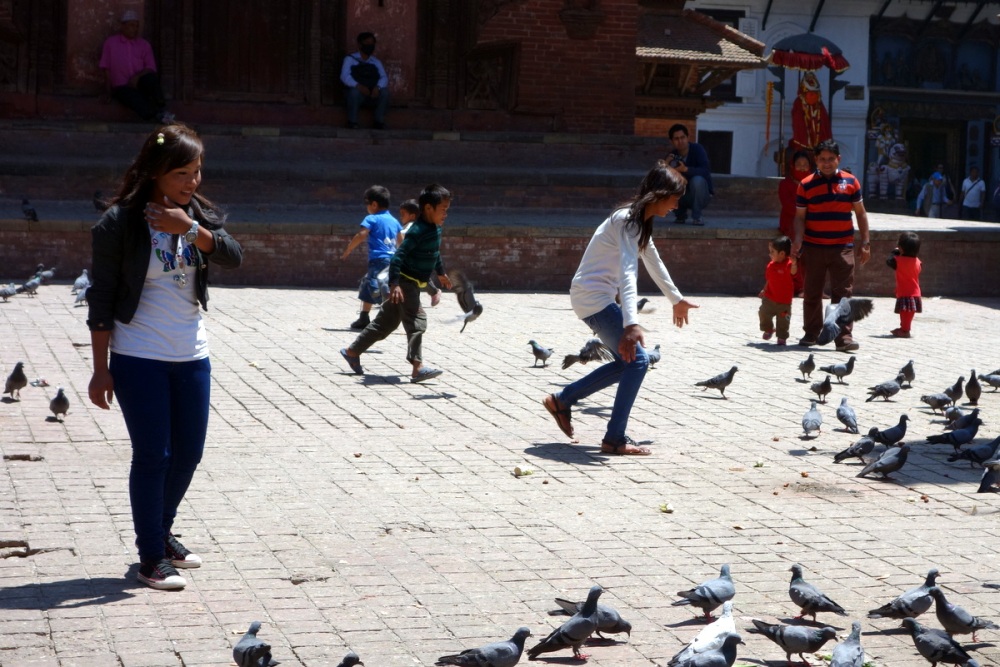 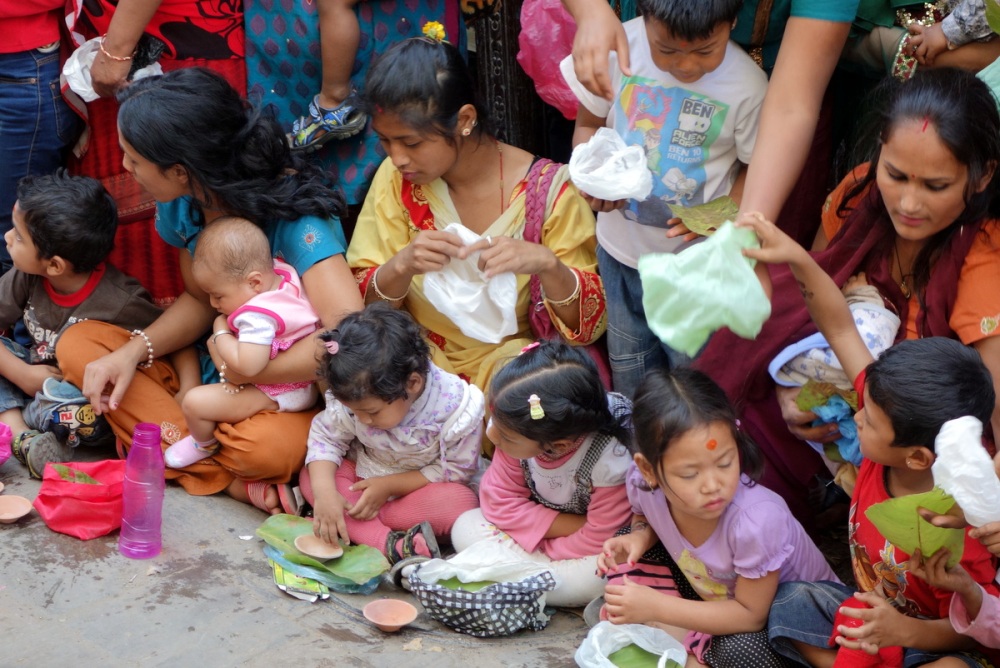 We hurried back to the Funny Nepal office to meet Hari for the first time. He was a young (29 years old), friendly and easy going guy who we learned started out as a porter but has now been guiding for several years. He took us out for lunch first where we had our very first (of many) dal bhat lunches, which is the staple Nepalese meal typically made up of rice, dal soup, some sort of curry, vegetables and a spicy pickled vegetable or spread. It was fantastic, and we knew then that we’d likely eat that meal many more times over the next few weeks. After lunch we headed to a nearby trekking store where Hari helped us chose our trekking poles and other necessary gear that we’d need to complete the Annapurna Circuit. He also brought us to a local grocery store so we could stock up an abundance of snacks like chocolate bars (I think we bought about 15!), nuts and powdered Tang (our Nepalese replacement for Gatorade). As we walked through the streets of Kathmandu with him, it seemed like Hari knew everyone in town! He was constantly stopping to chat and shake hands and catch up with people we’d randomly run into. In the mean time, we picked his brain about all the things we were curious about related to the trek – how long would we walk each day, would we get hot showers, what would the weather be like, would there be much snow, etc. etc. It was a relief to have someone to ask all our questions to before we left! After returning back from our shopping trip fully stocked, he left us to our last evening in Kathmandu and told us he’d meet us at 8AM the next day to catch a microbus to the village of Besi Sahar, where we would begin our trek. After packing up our bags, we wandered out into town again that evening to pick up a few more last minute things (a new day pack for Jesse, fake Gore-tex pants for me) before we fell asleep both nervous and excited about the adventure that would start the next day. 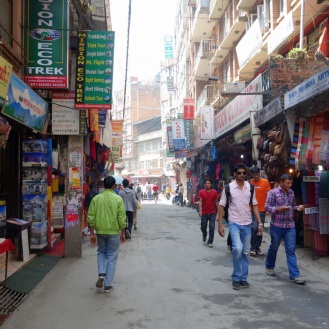 One of many stupas on our walk 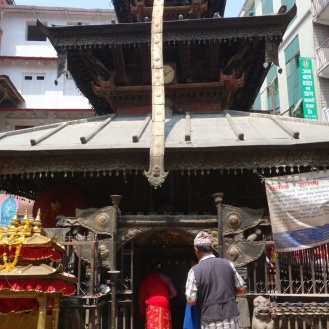 A temple in Thamel

We wandered across a parade or festival of some sort. This girl was watching from her window.

Line of kids waiting to give offerings 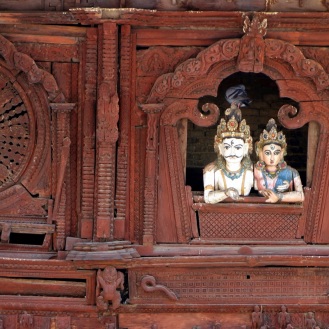 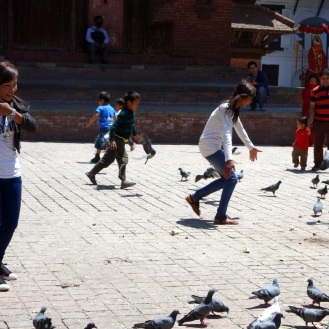 Playing with pigeons in the square

Though the little doorway to the beauty salon

Came across a wedding celebration in the street. These people were watching the festivities from a rooftop (trying not to electrocuted)

Watching the wedding from a window

One thought on “A quick stay in Kathmandu”