Normally Jesse will insist on overland travel as it lets you see more of a country and is generally much cheaper than flying. But since we wanted to go to Malaysia after Northern Thailand it seemed like a better time-cost trade-off to fly instead. We managed to find some cheap Air Asia flights to KL (that airline’s hub) so we took advantage.

Our very first impressions of Kuala Lumpur were that along with it being a really, really big city, it was definitely the hottest and most humid place we’d visited on our trip to date. More than ever before, we were both completely overwhelmed by the heat and seemed unable to acclimatize. Even I was sweating rivers every day, which pleased Jesse very much as it’s usually him that suffers more.

We were staying in the Chinatown area which had a lot of tourist bustle to it with shopping streets hawking fake goods and several street food stands as well. Our hotel was also conveniently located not too far from a few different transit lines and a bus station which made it pretty easy to get around. We’d been to Malaysian Borneo on a previous trip, so we had high expectations for the food that this country would offer. Malaysia has a unique mixture of Malay, Chinese and Indian populations (amongst others) which makes the food options equally as diverse. So as you an imagine, this post will be all about the food.

Using our typical food blog resources, we ventured out to several different areas to check out some KL institutions. Some highlights for us were the old school Malaysian Hainanese diner-style restaurants that had mostly been there for several generations like Yut Kee (where we tried their famous Roti Babi and Chicken Chop, which the lady sharing the table with us told us she’d been coming here for years to eat) and Hong Ngek for their crab balls and sweet and sour pork. These places have nostalgic character that you just can’t beat, and we enjoyed soaking in the surroundings as we ate. We also found a steamed bun stand in a small alley about 1 min from our hotel door which we frequented as many times as possible for their awesome hand-made BBQ pork buns and dim sum offerings.

Following with this theme, we had a kick-ass dinner at a place called Sek Yuen which we had a good feeling about the second we walked in. The place had dated furnishings, wait staff that looked like they’d all been working there for over 30 years and it was packed with massive Chinese families feasting on banquet style dinners. Though we were only 2 people, they sat us at their smallest table which easily fit 8 and with no menu (at least no English one) we relied on our waiter’s recommendations instead. We had their famous pi pa roast duck, incredible sweet & sour fish, and crispy baby gai lan. When we asked if we should order more, out waiter said “no, that’s enough!” Everything tasted amazing, and we gobbled it all up in record time. The tables filled with big, loud Cantonese-speaking families around us reminded me of mine back home and made us smile. Not wanting to leave, we asked if they had any desserts like red bean soup, but we’re told no. Then our waiter offered to make us a Chinese pancake, which we happily agreed to since everything else they’d made for us was so good. The pancake that came out was a massive, shallow-fried dough filled with a subtle, sweet filling. At first we thought there was no way we could finish it, but it was so tasty we got really close and ended up bringing the leftovers home with us for a midnights snack. We knew if we ever lived in KL, we’d probably want to come back here often. 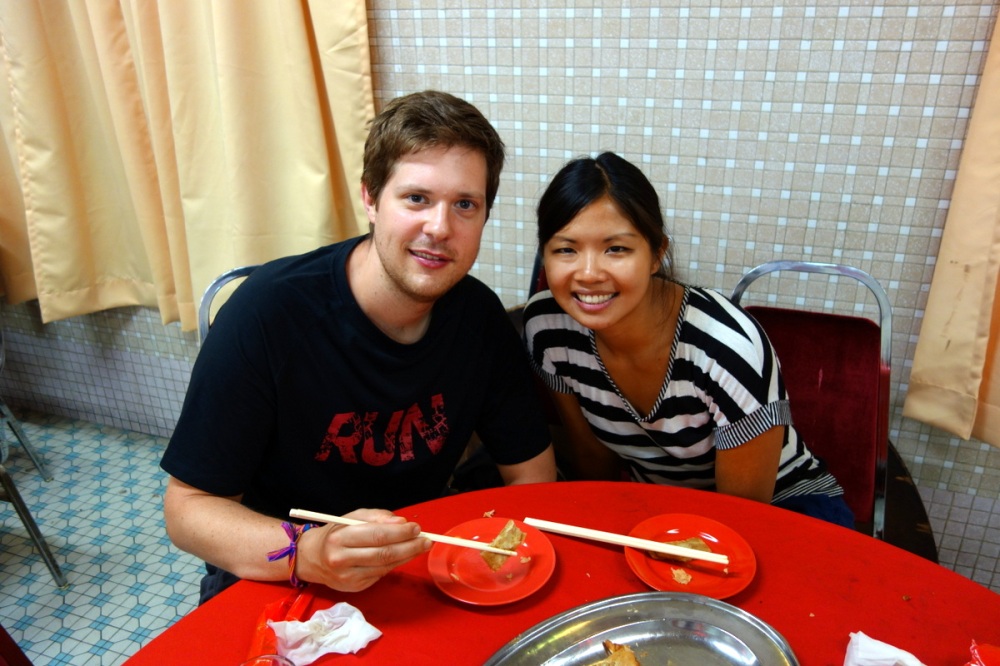 We also had the most filling lunch ever at an Indian joint for lunch. We ordered their Thali sets, which turned out to be the biggest plates of Indian food of our lives. Just look at the pictures. We were overwhelmed and when they offered us more rice we could barely contain our laughter.

Other highlights for us were visits to the Imbi Market where we tried our first (of many0 Chee Cheong Fun, enjoyed a return to iced milk tea, and had some delicious egg tarts. We also enjoyed a venture out to Bangsar Village where we had a good bowl of Sarawak Laksa (but not as good as the ones we had in Kuching) and explored a slightly more hip area of the city. 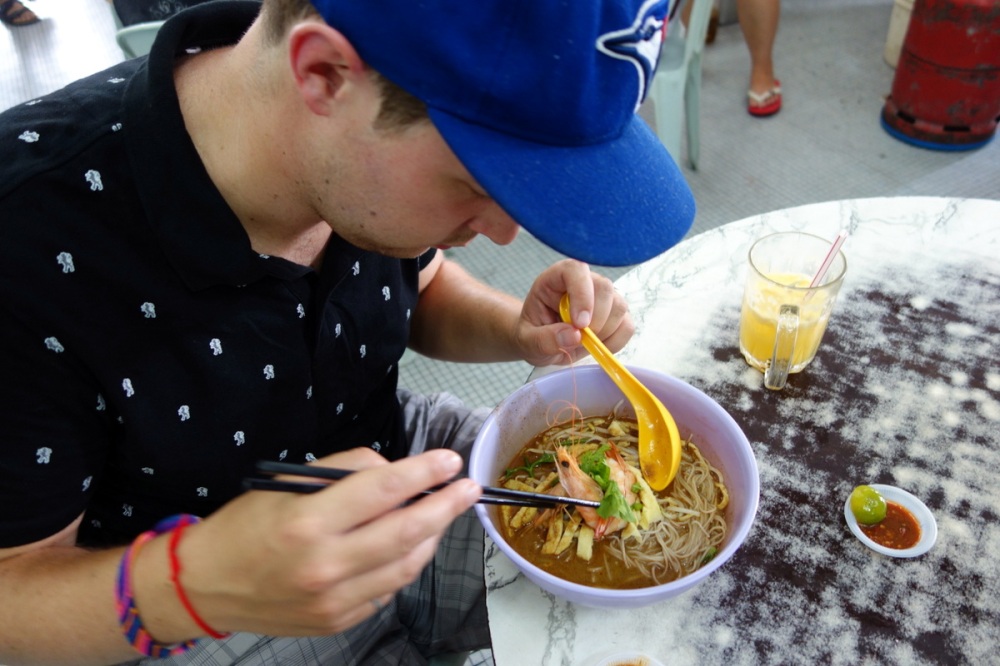 In between all our meals, we even managed to find a little time to take in some more typical tourist sites like checking out the impressive Petronas Towers (from the outside only though!) and making the trek out to visit the famous Batu Caves. We also seemed to spend a little more time than normal in the comforts of massive air conditioned shopping malls to help us escape the heat, and had a nice surprise when we discovered a Garrett’s popcorn inside KLCC! Yum!

But although we enjoyed some pretty great food here, KL as a city didn’t completely grow on us. The city had some beautiful spots, but felt overwhelmed with massive shopping complexes surrounded by chaotic traffic that made it difficult for a pedestrian to get around. We often found ourselves walking for long stretches at a time, not seeing any other pedestrians, always waiting seemingly forever for streetlights to change so we could dart across 6+ lanes of oncoming traffic. In addition, many of the older neighbourhoods we visited in search of good food seemed to be losing their charm with lots of “for rent” signs around or new businesses moving in without welcoming storefronts. This isn’t to say that we really had the time to truly explore everything this massive city has to offer, but I guess for us it wasn’t a city that we immediately fell in love with. The oppressive heat probably didn’t help. Still, there were some incredible meals and fun memories in KL to look back on. 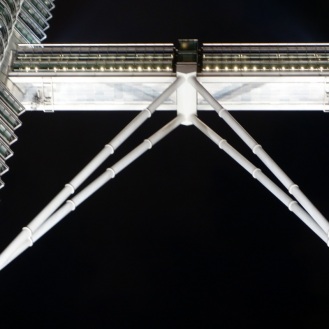 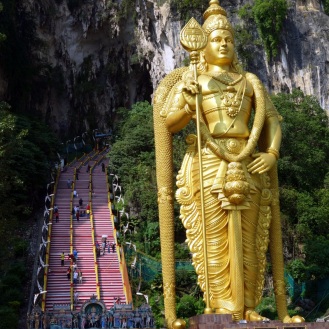 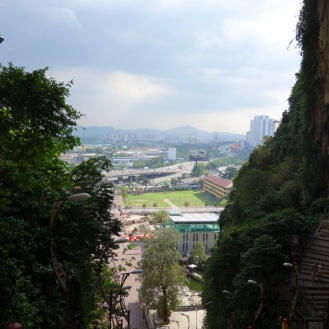 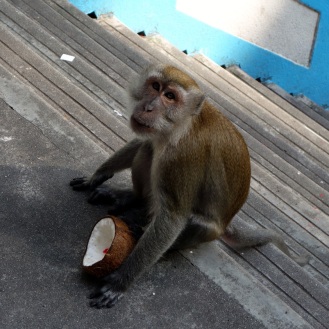 One of many Batu Caves monkeys 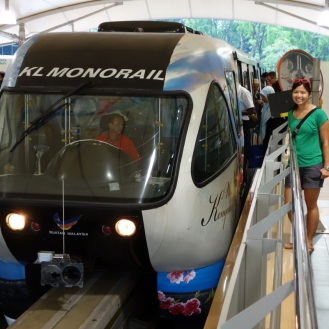 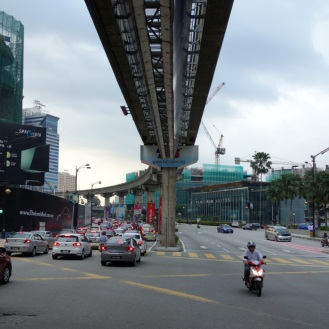 Back at the Petronas Towers 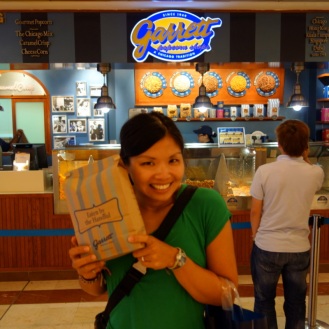 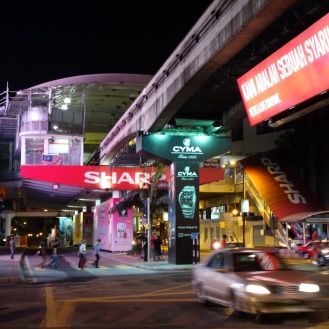 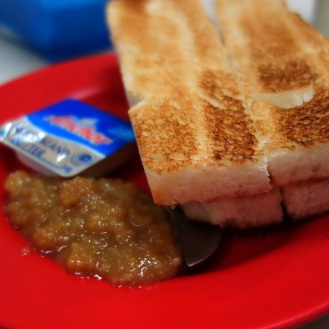 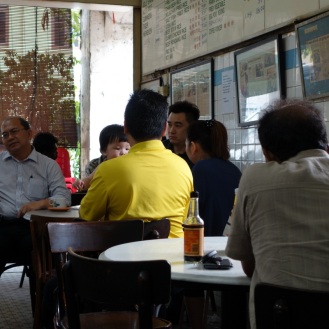 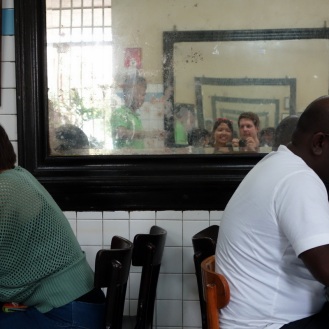 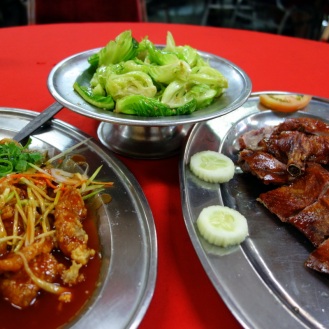 Back for more steamed buns 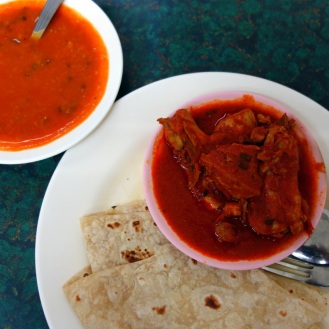 View out the front of the monorail.