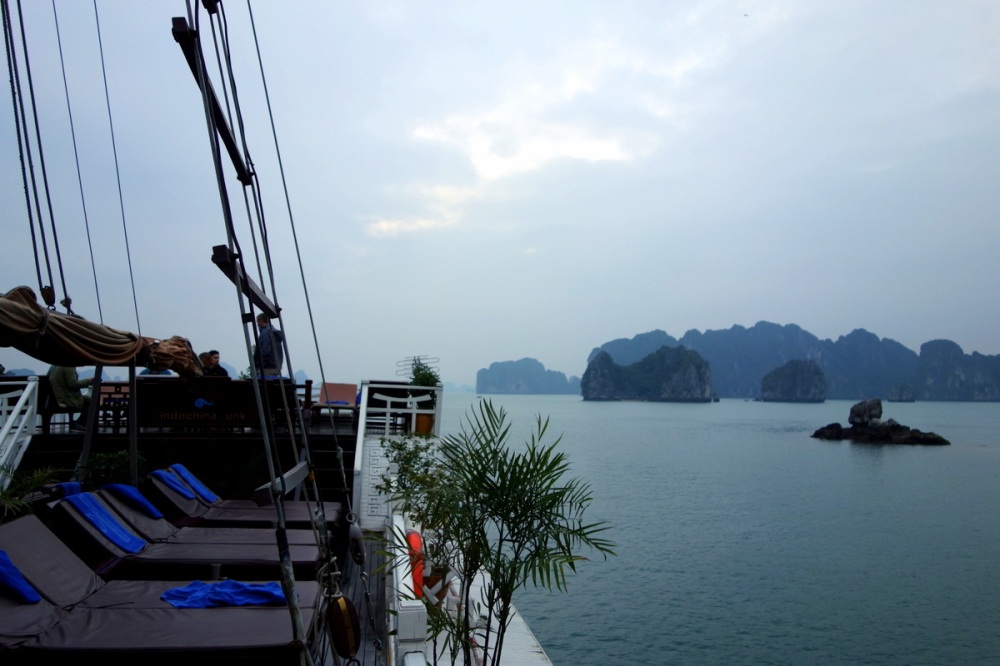 There are some places we visit where learning about the history or back story of a place really enhances our appreciation for what we’re seeing. But then there are other times when no guide or history lesson is really required to still be impressed. In the case of Halong Bay, it was the latter.

I have no idea how this natural wonder of the world was created or formed or for how long it’s been around or will stay around. But it didn’t take much more than our first glance at the enormous, seemingly unending population of limestone karsts and islets that populate this bay to be totally taken aback and wowed. It felt like we’d been transported to another world, completely mysterious and magical and overwhelming at the same time. This place looked even better in person than the postcards.

One of the many perks of long term travel is that it affords us the flexibility of not really planning anything too far in advance. We do have a few anchors that we need to work around (visa expiry dates, set dates for our trek in Nepal) but for the most part we have been fortunate enough to not feel too constrained by time. This came into full effect while we were planning our trip to Halong Bay. Our original plan was to spend just 3 nights in Hanoi before moving on, but a forecast calling for heavy rain and thunderstorms in both Halong Bay and Sapa (where we’d essentially be spending all our days outside) pretty much made us decide to stay put a few more days in search of better weather. Of course this suited us fine since we were already loving Hanoi anyway. When the forecast finally called for “overcast” and “partial sun”, we booked our tour for Halong Bay.

And as much as we typically don’t like opting for organized group tours when we travel, this time we both seemed to think it might just be easier for us to sign up for a 3 day “Junk” boat cruise rather than try to coordinate it all ourselves. Of course there were a million options to choose from, but we quickly decided to splurge a little on a “luxury” cruise that had a great itinerary and kick-ass reviews. This worked out wonderfully for us, and we actually ended up having some of the most relaxing and fun-filled days of our whole trip this far.

Our boat was called the Dragon’s Pearl by Indochina Junk and had a total of 18 guests on board, supported by an awesome crew of talented men who took great care of us and the boat. The other guests hailed from all over, with some from Australia, New Zealand, Singapore, Brunei, France, the States and even a fellow Canadian gal from Quebec. We really lucked out because the other guests ended up being very social, and it was really great chatting and getting to know everyone over our 3 days together. 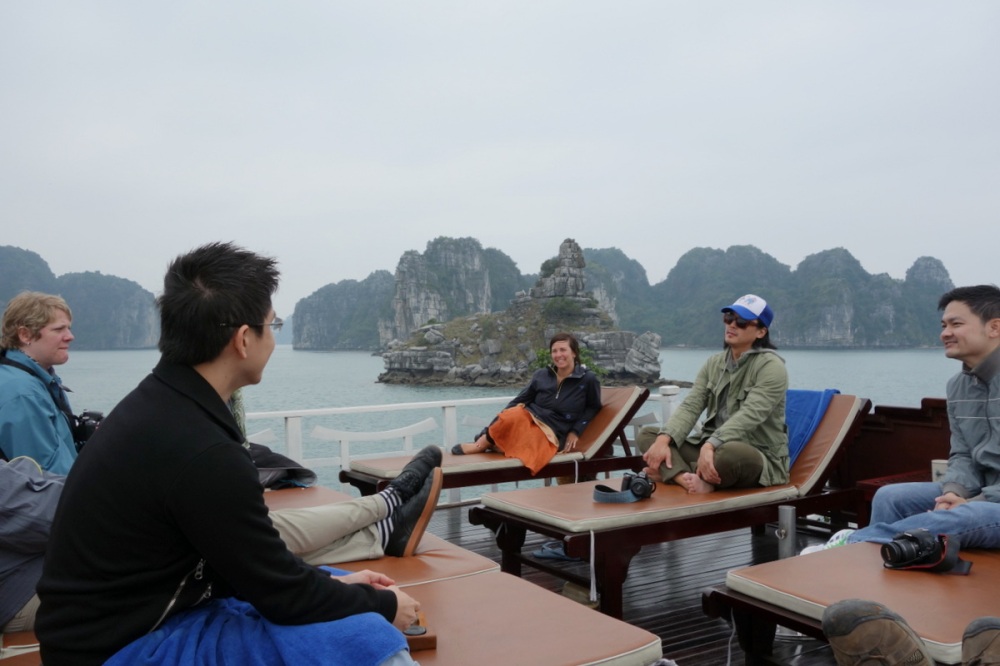 We had a surprisingly comfortable and well appointed cabin on the boat with a massive set of windows looking out onto the water. Our meals were all taken care of by the boat crew who cranked out some enormous multi-course seafood feasts for us each day. But really the best part of it was cruising around and taking in the breath-taking views of the bay. Our boat started in Halong Bay but seemed to actually spend most of its time somewhere called Bai Tu Long Bay which, from what we can tell is just northeast of the main part of the bay and looks exactly the same but has fewer other boats around. Didn’t really matter to us since we honestly could have been cruising around the same set of rock formations for hours and hours and I probably wouldn’t have been able to tell. It all still looked amazing.

Our junk boat was really beautiful, constructed of dark stained wood panels (sadly all the boats in the bay were recently required to be painted white on the outside so it doesn’t look as nice as it probably originally did) and the captain kept it cruising at a perfect pace, slow enough that you could really take in the incredible views but also fast enough to create a refreshing breeze on the deck.

We had a gorgeous first day of blue skies and white fluffy clouds, though the next two days got a little overcast and cool. But it really didn’t bother us. Everything was still ridiculously beautiful and no rain meant we could be outside on the deck pretty much all day. In fact, the beach towels they set out on the comfy lounge chairs lining the top deck of the boat doubled as nice blankets for all the guests as we chatted and got to know each other while enjoying the incredible views. I think we both thought we could probably spend a week on this cruise and never get bored.

We went sea kayaking through the bay on our first and second day, which forced us to re-visit our doubles kayaking skills (and patience) which hadn’t been tested since our time in Koh Chang where we’d spun in so many circles that we’d resolved that we’d only ever kayak solo after that. Thankfully the waters in the bay were extremely calm so competent steering was not a necessary skill and we actually had a lot of fun. Getting up close to the massive rock formations was pretty amazing, and made us really appreciate the immense scale of the environment surrounding us. 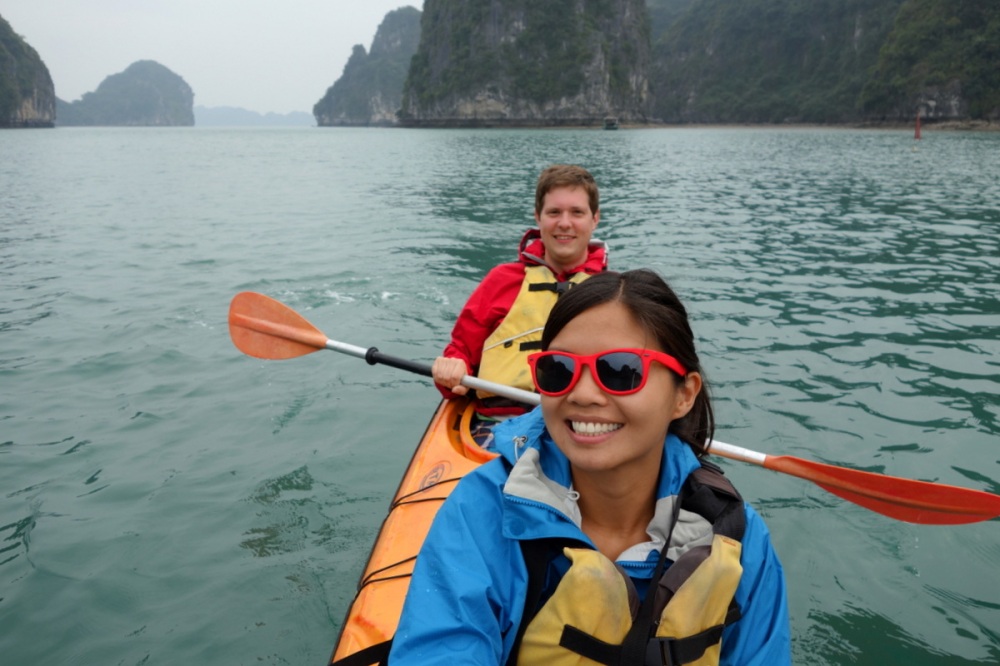 We also got to visit a little floating fishing village where several dozen families live right on the water in the midst of all the limestone pillars. We were all rowed in traditional fishing boats by some of the locals from our big junk boat to their main community gathering place. We met the chief of the village who served us some tea that I swear tasted like tobacco, popped our heads into one of the houses, and were supposed to have a chance to visit the children at school but unfortunately it was Saturday so the kids were nowhere to be found. We awkwardly sat inside the classroom anyway and got a short lesson in Vietnamese from our guide. A bit of an odd visit, but we did enjoy the chance to sit in the traditional fishing boats and had a good chuckle because one of the ladies rowing a boat was carting along her little boy with her who had the most unimpressed look on his face the whole time.

We made our way by kayak on the second day to small island with a nice sandy beach. And while most of the folks opted to just kick their shoes off and walk around the island, Jes and I were intent on getting a good swim in. The water was ice cold at first, but after the initial shock wore off it ended up feeling great. It was a pretty cool experience to be swimming around within the bay and I imagine could even be quite refreshing for those traveling during the summer months. I think some people on the boat thought we were a little crazy for going in despite the rather chilly temperatures, but we were proud we did it. 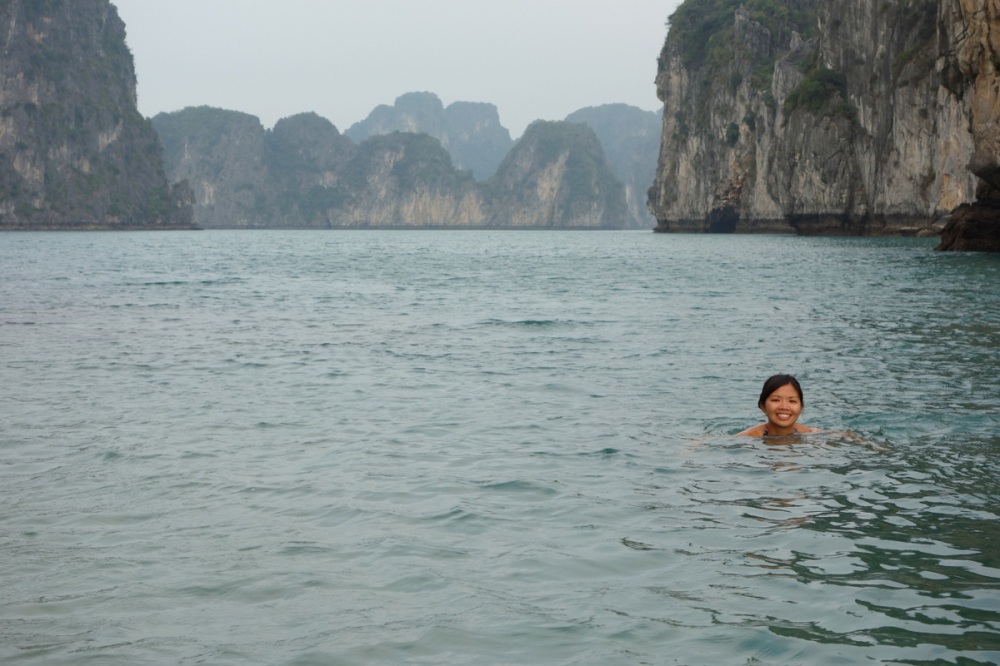 On that same island later that day we actually ended up climbing into the limestone mountain which housed a little cave inside. The cruise itinerary promised “dinner in a cave” so we didn’t really know what to expect.  As we all walked into the cave opening, I think we were all genuinely shocked at how beautiful our evening’s setting looked. The crew had lit up dozens tea lights along the path that led to the table which was equally impressive in its set up. Then they proceeded to bring out course after course of fresh and delicious food that they were barbecuing at a grill just outside the cave. The chef also wowed us with some incredibly intricate fruit and vegetable carvings that were used to further enhance the table decor.  It definitely felt like we were filming an episode of The Bachelor, because the setting and service we were getting were totally tv-worthy. It was a really memorable night and we all left feeling like we’d experienced something pretty special. 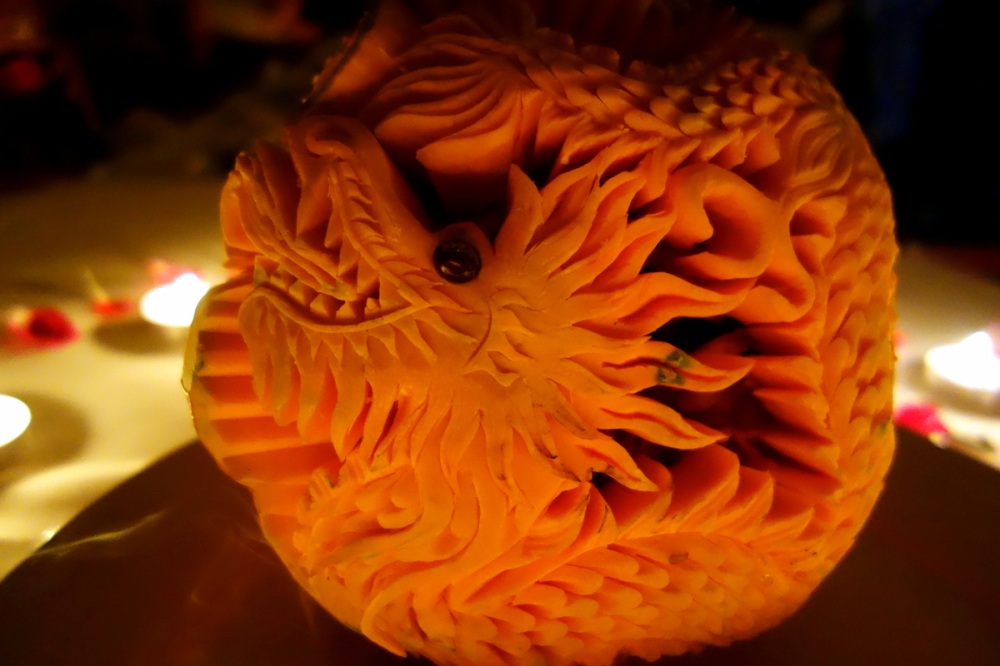 We really didn’t expect to enjoy the cruise and the company of all the other tourists as much as we did, nor did we know how breathtaking Halong Bay would be up close. So pretty much everything about our time in Halong Bay exceeded our expectations by a long shot and remains some of our most memorable days on the trip.

PS – for some reason on our return back to Hanoi, the minivan stopped in a small village where we were treated to watching a water puppet show put on by the locals. This was one of those “Vietnam Attractions” that Jesse and I had been proactively trying to avoid, but alas we had no choice in the matter as it was the last item on the Halong Bay Tour itinerary. I suspect the show we saw was a fairly amateur version as the “puppetry” wasn’t really very impressive and the accompanying music (which we hear in the Hanoi show is actually from live instruments) was a fairly poor recording being blasted on a pretty old sound system. It felt like such a drastic contrast for us, having just gotten off such a beautiful, luxury cruise to be sitting in this village watching puppets dance around in water. But anyway, it made for a good laugh and re-confirmed our original decision to not pay money to see the show in Hanoi :) 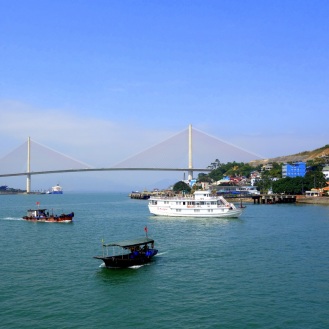 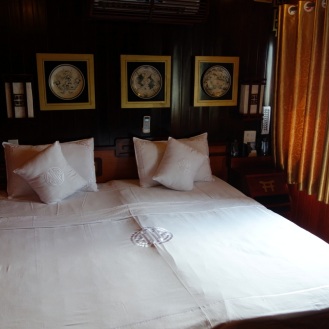 Sailing into the bay 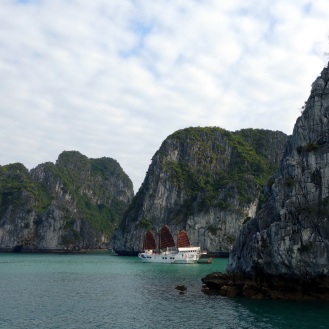 Out for a kayak 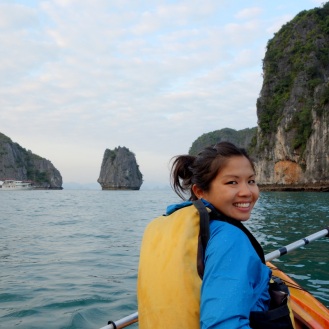 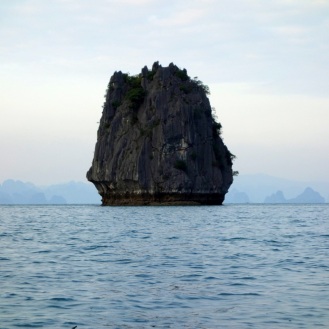 The Dragon’s Pearl anchoring or the night

Or ride to the village

Riding back to the boat 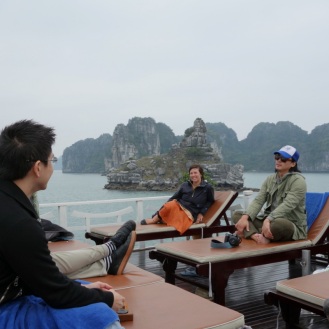 Chatting on the deck 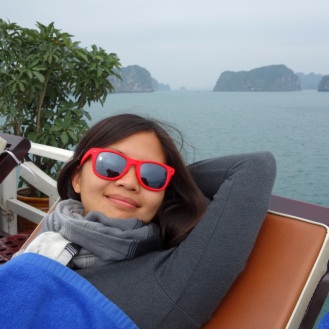 Lounging on the deck 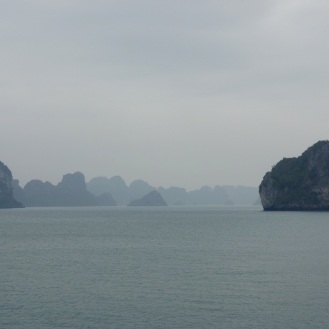 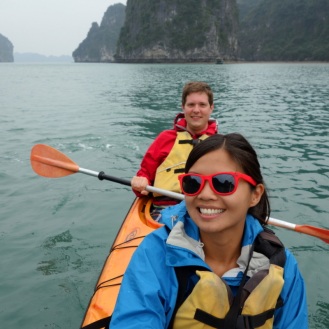 Kayaking on day 2 (to the beach this time) 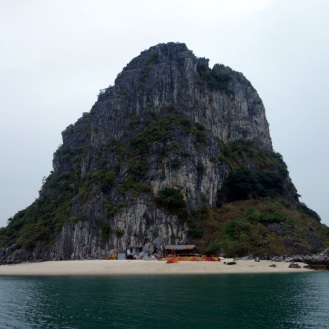 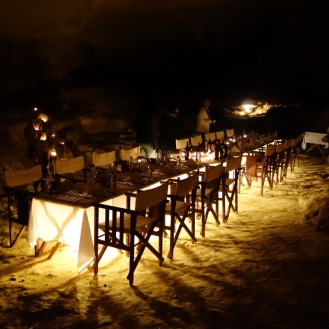 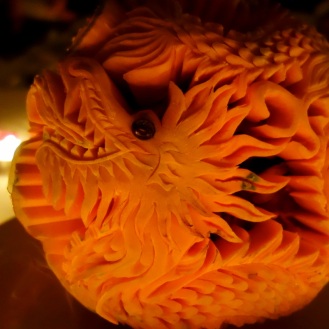 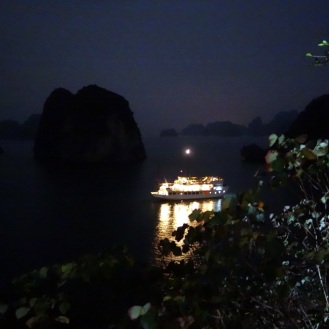 Dragon’s arl at night (view from the cave entrance)

One thought on “Cruising through Halong Bay”